QU-AX was founded in fall 2000 – 20 years ago. A good opportunity to look back on 20 years of unicycle development:

The founder of QU-AX, Egon Becker unloaded the first 50 unicycles from a container back in 1986, this was the beginning of importing unicycles in Germany. At that time he was buyer for a large German dealer purchasing association. Most of the unicycles on the market in the late eighties were still home-made or small handmade batches. At the right, you can see a typical one of the late eighties – with so called “lollypop-dropouts” – turning smoothly – but not very sturdy. In the year 2000 he founded the “Becker Vertriebs-GmbH” with the brand QU-AX. In 2009 the brand “OnlyOne” was registered. Guess where the name QU-AX comes from? QU-AX was the dog of the founder: 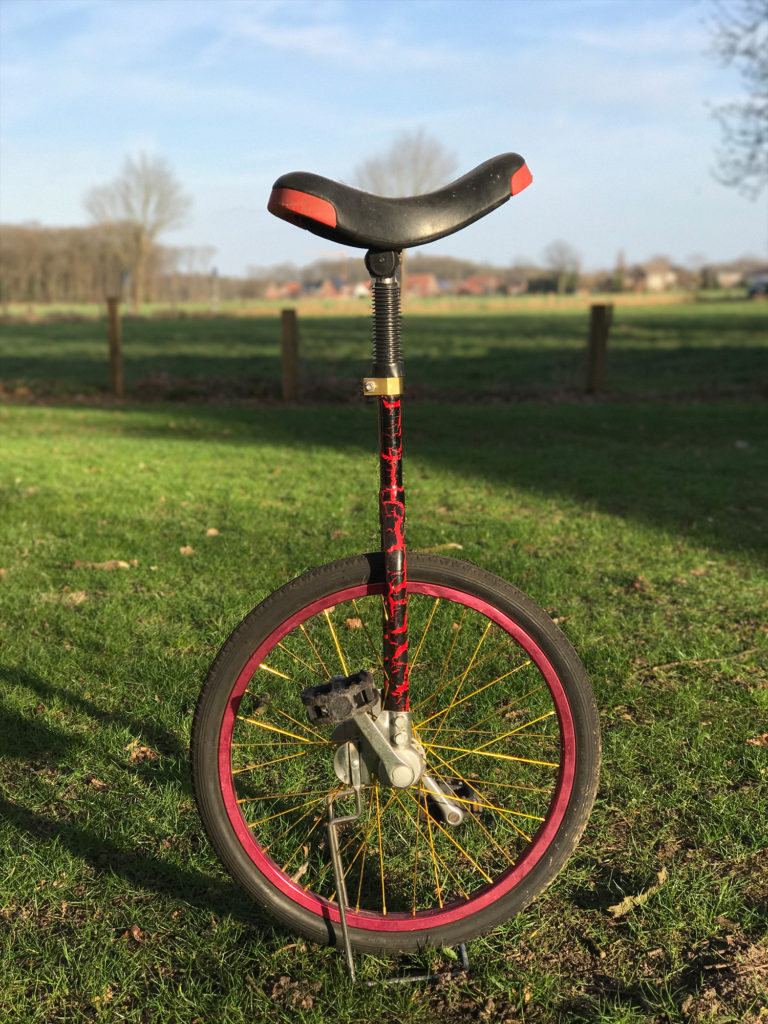 A typical unicycle like they were in the late eighties 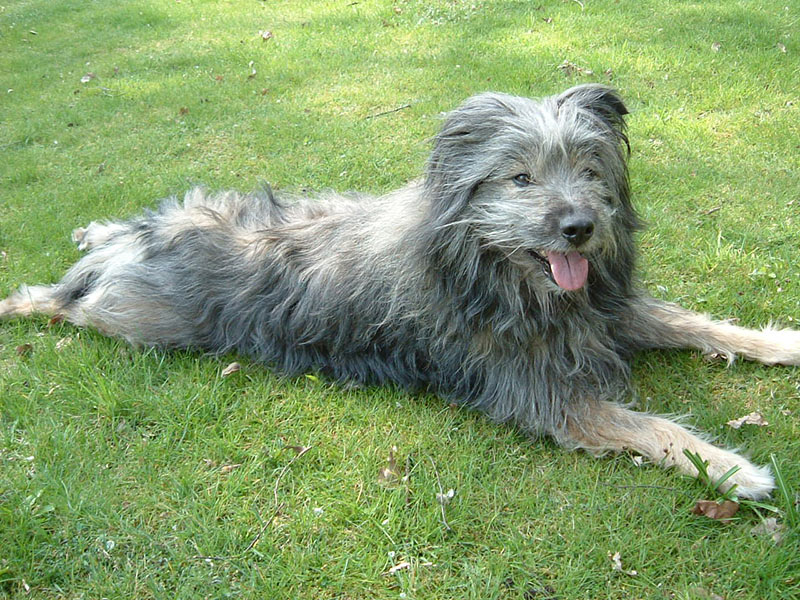 The first range of unicycles

The first QU-AX unicycles was the “Standard” range – today the OnlyOne. At that time the only mass production unicycles were made for Japan (Miyata). The unicycles on the European market were very basic and the choice on the market was small. The unicycles at that time were not very durable – and not comfortable either. They were more circus equipment than sports equipment. To make unicycles really popular, children, parents and bicycle dealers had to understand that anyone can learn to ride a unicycle – at any age. 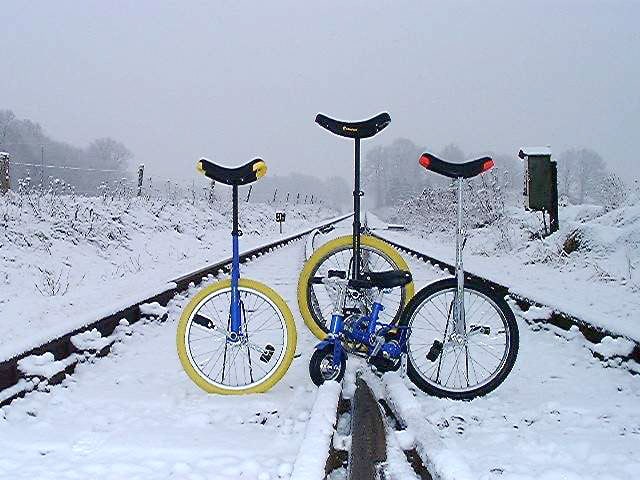 The photo above shows the first QU-AX unicycle range. The standard unicycle (right), the luxury (left), and the professional in the middle. So the Minibike, which was still blue at the time, was also one of the first products. The equipment, as well as our efforts to bring the sport to a wider audience, have helped to bring the sport forward in this country. Big suppliers like Tchibo or supermarket-chains made special offers with unicycles and so unicycling became a trend sport for a while.

The professional unicycle mentioned above – a freestyle unicycle – was the first QU-AX model in the high-end product-range. This was often upgrade for freestyle competitions, with Panaracer HP tires and MKS pedals. Also at that time chromed models with short cranks were standard in this discipline. 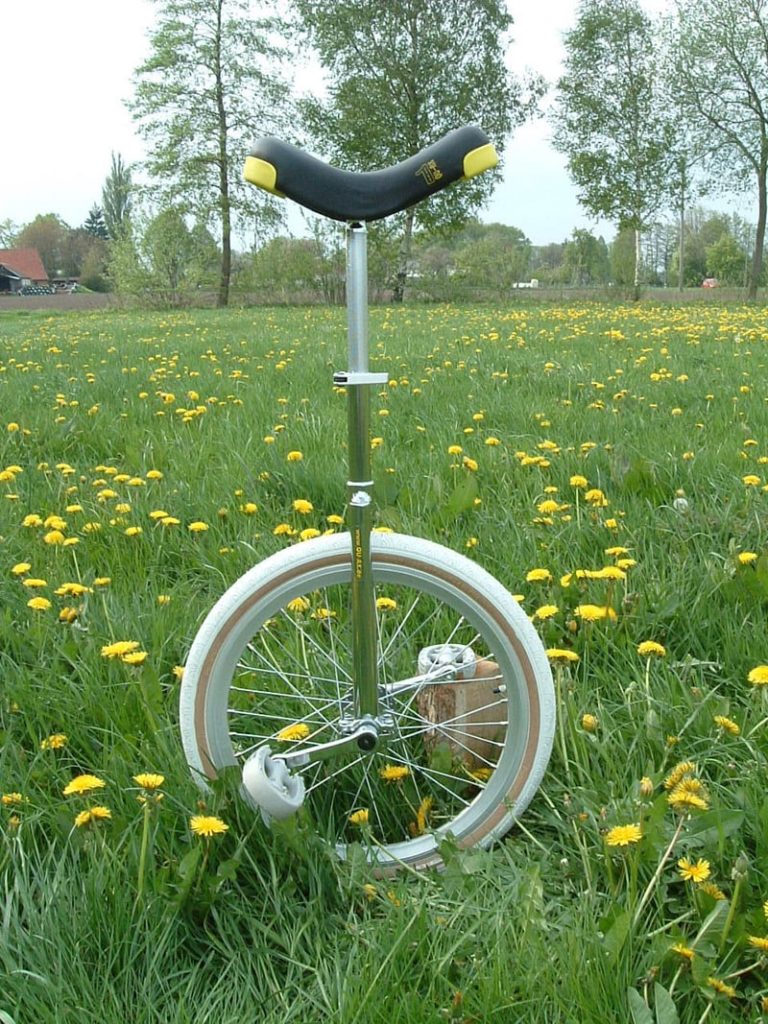 This unicycle was and still is one of the most common unicycles in freestyle competitions. Our goal was and is to make unicycles available to the widest possible public by offering high quality unicycles at a consistently high quality and affordable price. At the same time, the quality and durability of the unicycles has been and will be constantly improved.

Pogo sticks were already added to the product range, as well as other wheel sizes.

Also at this time the Municycling was born. Kris Holm invented this discipline. The first Munis of that time were built by improvisation from a mixture of unicycle parts and mountain bike parts. 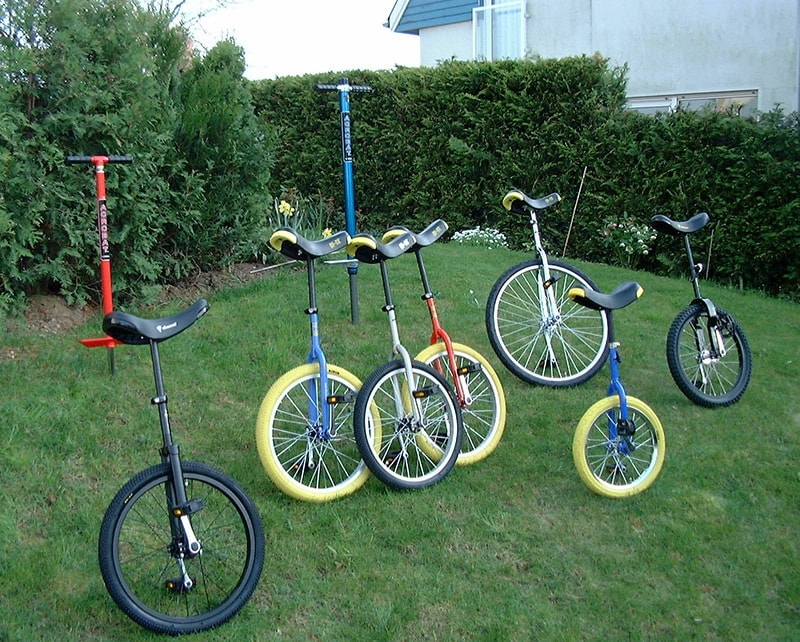 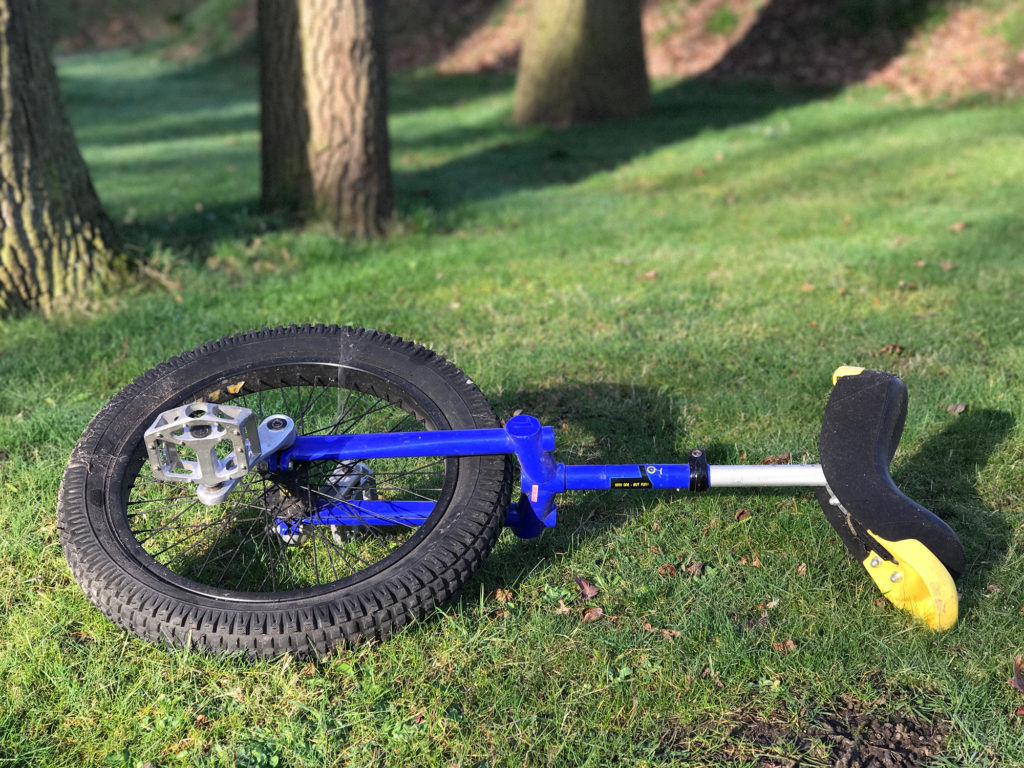 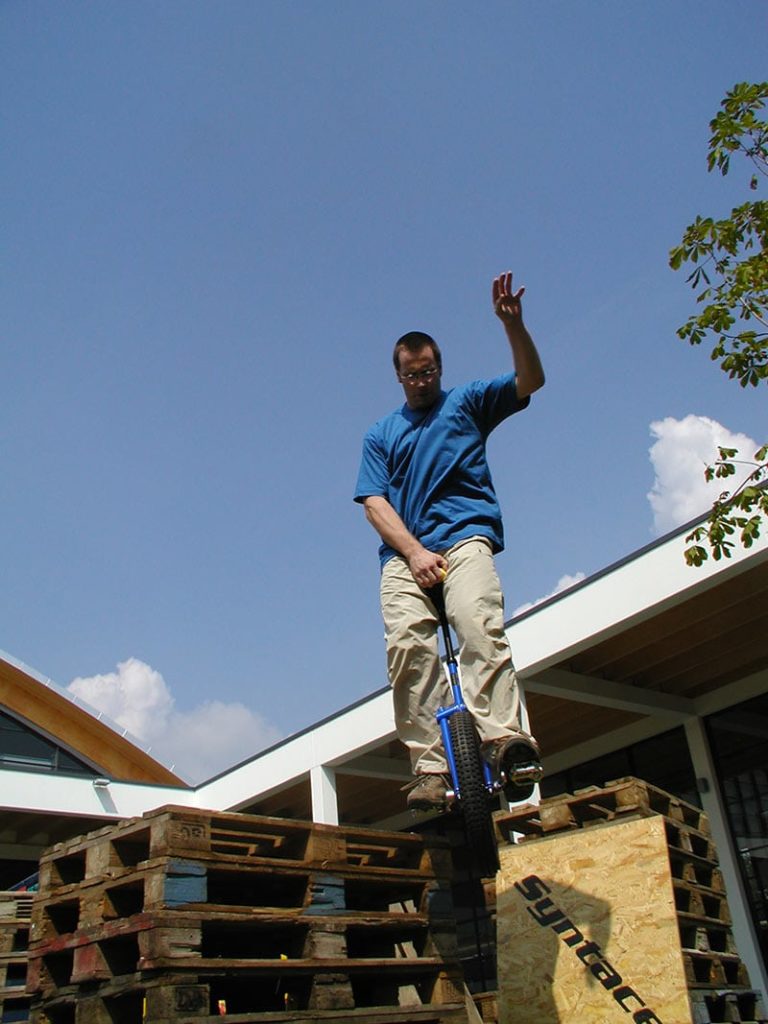 And so the first mass-production Muni in the world was also built:

A multi-spline axle similar to those used in BMX was the core of the first QU-AX Muni hub. The legendary yellow QU-AX Muni hub was later the first to do a front flip on a unicycle. The first Muni had 48 spokes and a voluminous 19″ trials tire. Both remained typical and common in trials for many years. The 19″ CreepyCrawler was first installed on the QU-AX Muni, it was many times lighter than the “Luna” tire that was common until then. 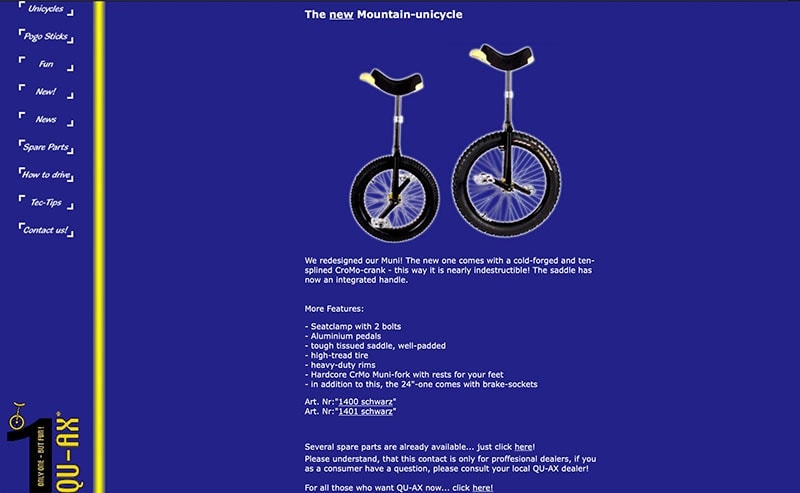 In 2003 the first of many legendary GMTWs took place. This stands for “German Muni Trial Weekend”. Numerous participants – among them in 2005 also a participant named “Kris Holm” came together over a whole weekend to exchange ideas and celebrate municycling together. This event still takes place every year! 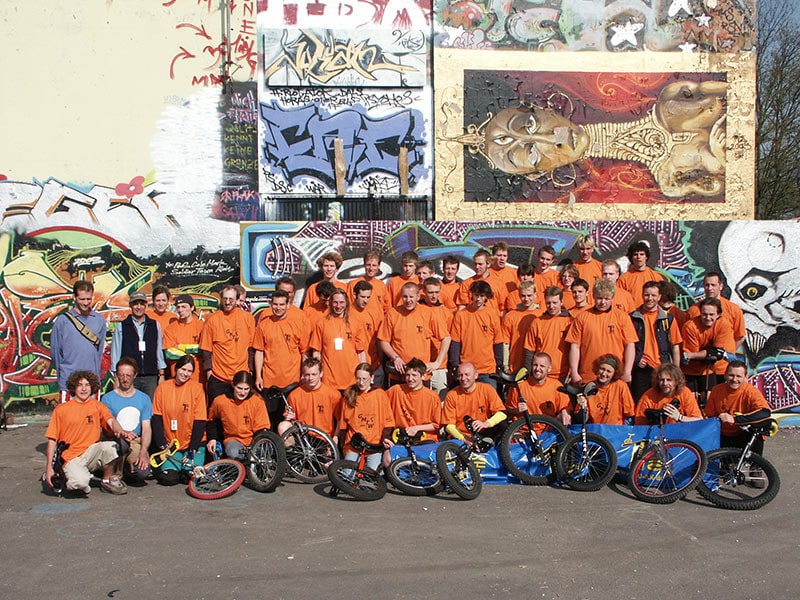 QU-AX has been supporting the GMTW from scratch on – as well as a lot of other events and also the German Team of Unicon: (can you find Lutz Eichholz on the picture?)

Make it available for many

In order to bring unicycles to the masses, we attended the Nuremberg Toy Fair, the Eurobike and the Taipei Cycle Show. Especially in Germany, high-quality, affordable unicycles were mainly sought – and bought – in the bicycle trade. So they became more and more a children’s vehicle – and also in the minds less and less a circus vehicle. Adults also understood that anyone can learn to ride a unicycle. At the same time the first printed unicycle catalog was created – which still exists today: 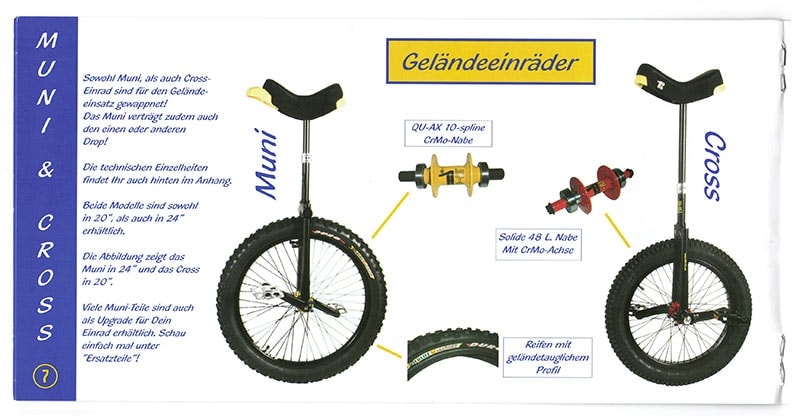 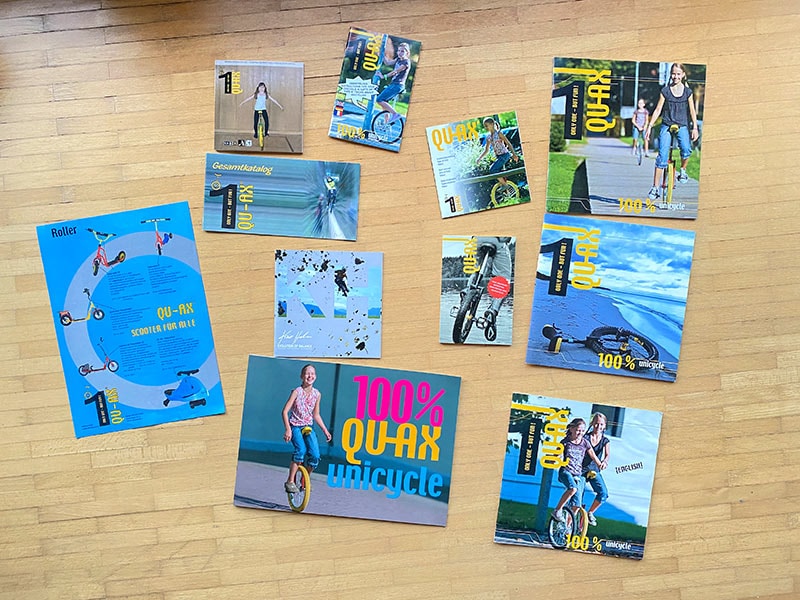 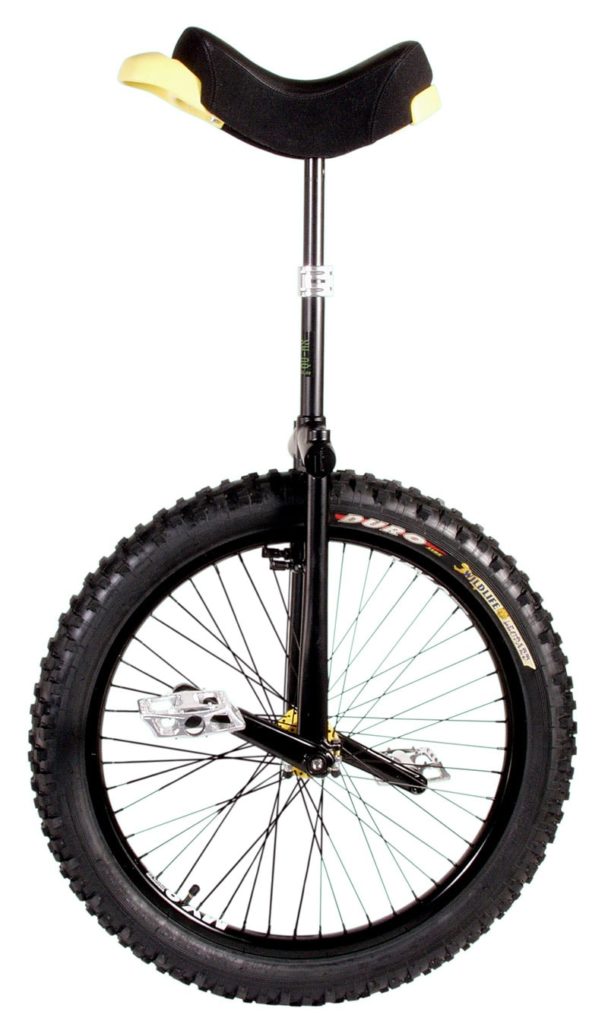 Over the years, the Muni series was expanded to include more whee-sizes – first, a 24″ model with 48 spokes. In the beginning there were only 170 mm unicycle cranks available – not because that was great to ride, but because that was the only available length on the market. So we started making our own lengths – shorter ones – that required high production quantities – an investment that paid off: a gain in riding-opportunities and comfort. At the same time, we made cranks with less Q-factor – which also significantly improves handling on the unicycle. 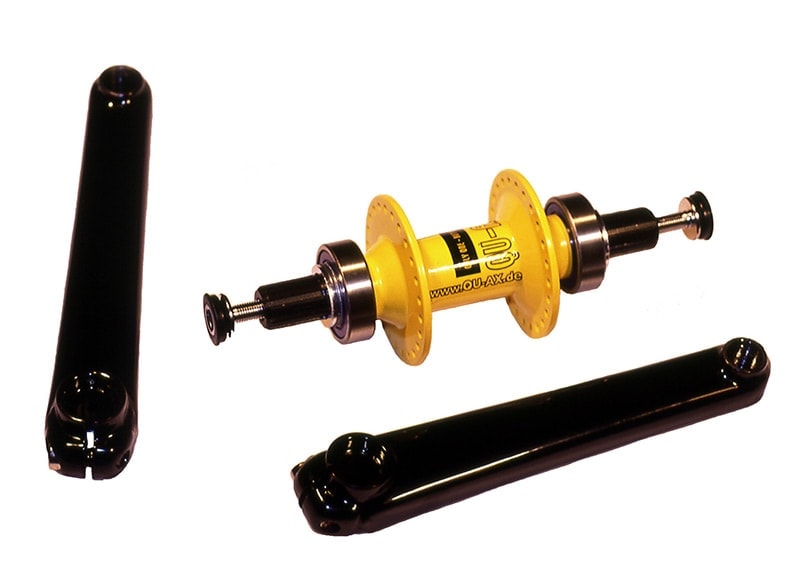 In the past, all unicycles were equipped with a simple square axle. With the spread of Munis, multi-tooth axles also became more common. These were much more robust – and also got lighter over time. We have a great background in bicycles from a technical/engineering point of view – which is why we were the first to bring the ISIS system to the unicycle – and then the Q-Axle system in 2012. We learned from the further developments in the bicycle sector – and adapted it to the unicycle and its specific needs.

ISIS brought more durability and stiffness due to the larger contact surfaces between crank and axle. Then, it was a real “standard” which made things easier in terms of what to fit to what unicycle and also for spare parts. The disadvantage of ISIS is its wear. The cranks are pressed onto a conical axle – which wears more and more over time. 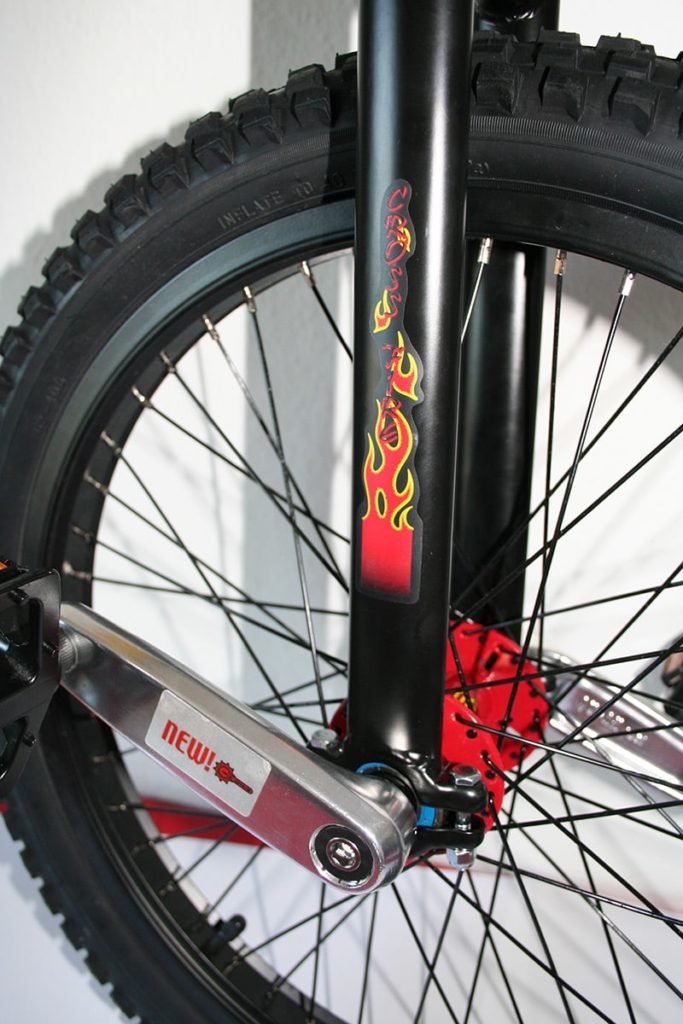 This problem was eliminated with the Q-Axle system. An even larger, hollow axle saves weight, brings even more stiffness – and thanks to 24 splines an even significantly larger connection surface. Furthermore, the cranks are now clamped to the axle – and no longer pressed. No matter how often cranks are changed, you will not experience considerable wear. One of the greatest achievements in unicycle development. We have never had hubs / cranks as reliable as these.

Here, too, we invested in a variety of lengths and variations – to offer a wide choice. While the choice in the ISIS range at the same time on the market is getting smaller. 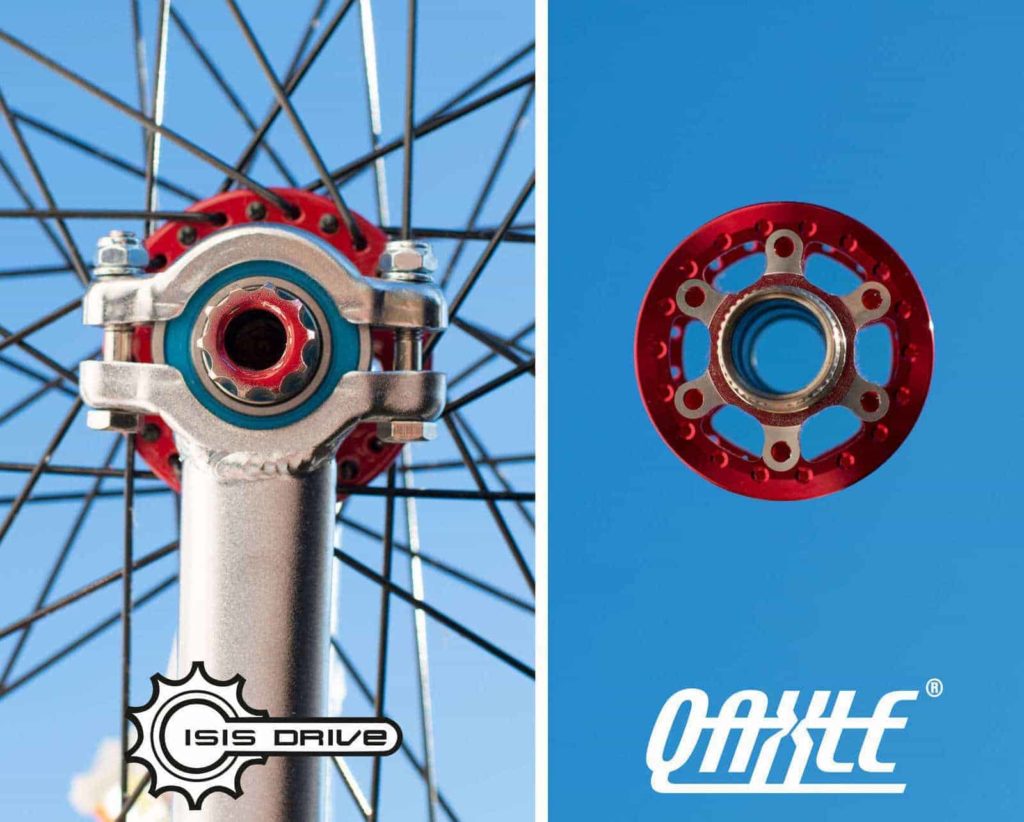 QU-AX “Standard” became a separate registered brand with the introduction of the “OnlyOne” in 2008. The goal of the spin-off was to offer this brand to more vendors – as QU-AX was exclusively offered by authorized importers in many countries. This was to make quality, affordable unicycles available to even more dealers and customers. Chris Martin, the frontman of the band “Coldplay” rode a 24″ OnlyOne in his music video “paradise”: 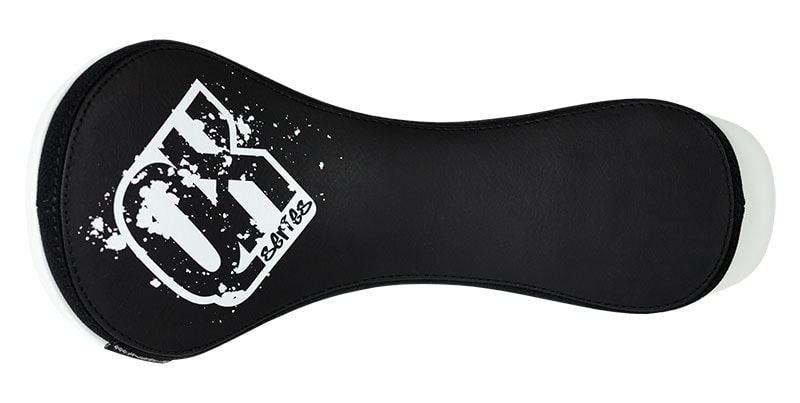 In 2009, we introduced the QX-series – our high-end component range with lightweight aluminum frames, a carbon seatpost, titanium bolts and a tight flatland saddle with a modern design. In 2018, we renewed the QX-series range under the headline “#rgb” – which stands for forks with thin-walled, colorful forks with large tube diameters – which can be combined in 4 beautiful colors to your individual taste. Also created as part of this series, the popular QX-series Eleven saddle in collaboration with Kris Holm.

Also since 2009, David Becker, the nephew of the founder is full time at QU-AX. He had already been responsible for marketing since the beginning. Since 2018, the company is led by him alone. 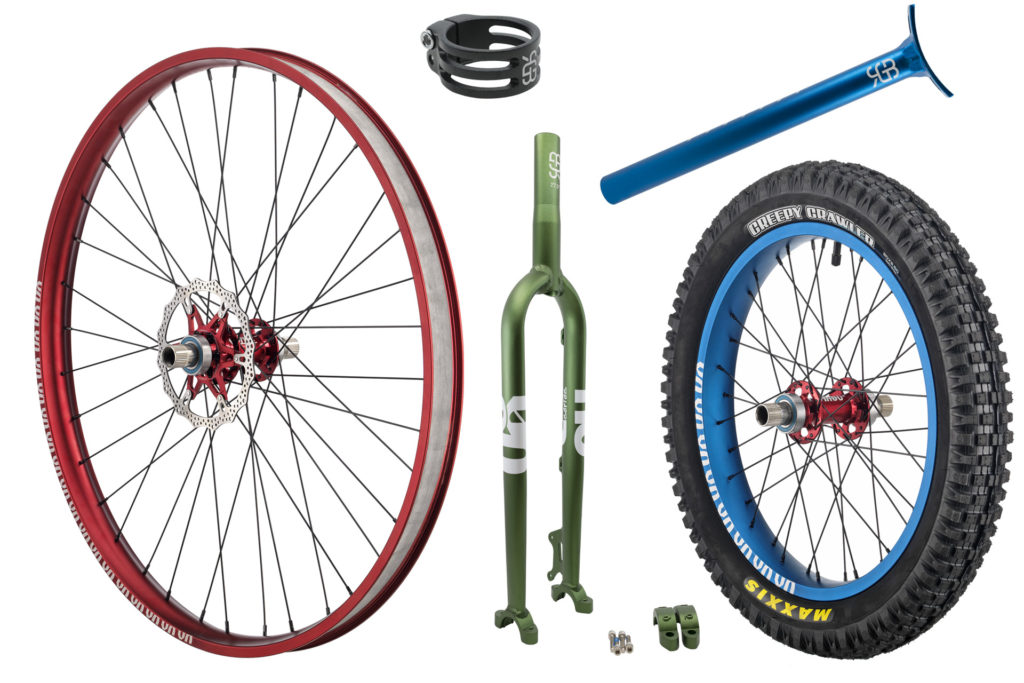 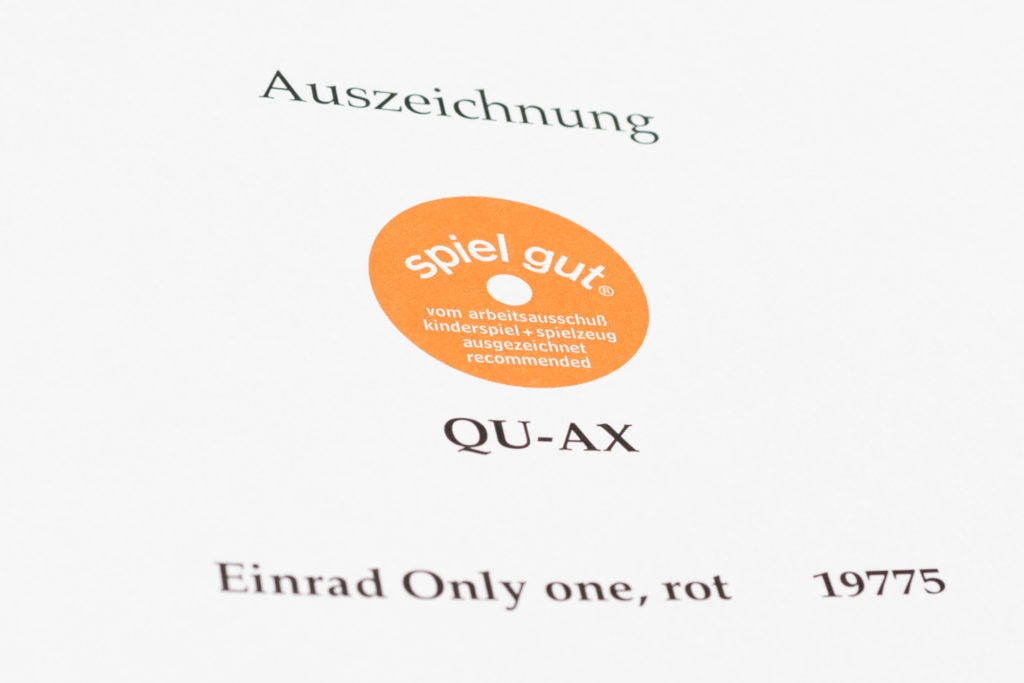 Numerous products from QU-AX have been awarded over the years – luxury and OnlyOne unicycles with the spiel gut seal:

Other products, such as the Pogo Sticks or our Balance Trainer, have been awarded the “Bewegte Innovation” label.